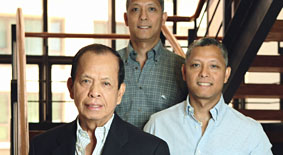 When the Sons Also Rise

William Coscolluela’s legacy in Philippine architecture is assured. Together with such pioneering architects of his generation that includes Felino Palafox, Lor Calma, Recio Casas, among others, Coscolluela has pushed for the modernist agenda in the built environment, characterized by projects known for their clean lines, evocative silhouettes and surprising details. The two recent accomplishments under this firm, W.V. Coscolluela & Associates, are the Zuellig Building in Makati City and the SM Aura Premiere in Taguig City that best dramatize the architect’s love of fluidity, transparence and structural expressiveness.

And with the company’s half-a-century existence, it appears that Arch. William Coscolluela is ready to turn over the reins to his two sons (who are, by the way, twins) Gil and Gary. As architects, the two have collaborated with their father for major projects and have produced individual work. “As their father and as a founder of a firm that has been designing and building for over 50 years, I am especially proud to see them in these positions of leadership,” says the senior Coscolluela.

Though the brothers are now working side by side with their father, William remains as the chief architect of the company, overseeing projects throughout the archipelago. The company has either completed or is busy making designs for the Ateneo Cultural Center, Iloilo Convention Center (located in William’s home province), SM Seaside Project in Cebu City and the Unilab Corporate Center.

A cursory look at the coffee table book, titled Function+Form, produced by the company will reveal a staggering portfolio of built projects which include not only commercial and residential spaces but also civic centers and recreational hubs as well. It’s surprising to know that the architectural firm had a modest beginning. “It was after taking the board in 1958 that I went on my own,” recalls William. “I started getting little jobs…I draft on my dining table. I worked out of the garage and eventually got a cousin to do drafting work for me.”

Now, his entire family is very much involved in the company. “We have an entire staff working with us and many of them have been with our firm for a very long time,” the esteemed architect says. “I am very proud to have them around me, my family and my staff. It is good to have people you can depend on and trust with our projects.”

Among the taipans who are now building one project after another, Arch. Coscolluela emerges as a choice architect. Queried on why he seems to have this kind of reputation, the architect demurs: “Of course we are flattered when a taipan chooses us to help them instead of another firm. But I would like to think they chose us not just because of our reputation, but because our work speaks for itself.”

Beyond the reputation and the good press, it is the quality of work that the architect hopes his sons to prioritize in each and every project, whether big or small. “My sons are continuing the legacy of innovative design, good quality work, finished on time and on budget.” With the company’s LEED experience for the Zuellig Building, the company also emphasizes “a more environment-friendly approach to the design and construction of buildings.”

Ecologically-safe projects, maintains the architect, are the way of the future. “LEED certification has raised awareness about environmental sustainability,” he says. “People have begun to realize that green architecture is real, and can be accomplished for any structure.”