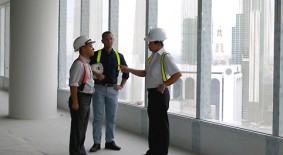 When three are better than one Coscolluela

ARCHITECTS must really make more than handsome bit of living, judging from the success of William Coscolluela who constructed back in 2000 his own 27-story office and residential condominium on Perea Street in Legaspi Village, a stone’s throw from tony Greenbelt Mall.

The edifice is anchored on its skin, namely expensive French limestone which was used to cover the façade of the first few floors up to the top of the podium level of the project known as The Palisades.

If Manhattan has its brownstone, Makati City has its granite, but Coscolluela has his family’s crown jewel, not a rough demonstration of the creative combustion of striking hammer on stone or throwing plaster on a wall but a testament to an age of refinement. Like a diamond on its cushion, The Palisades is polished to the last centimeter.

The main entrance sports a canopy of frosted glass and steel that was pre-fabricated and cut to exact measurements just like the limestone (and practically all of Coscolluela’s middle to recent work.) The design began as ideas culled from the technologies of the times and measured through a computer whose data was e-mailed to a supplier and the components forwarded to the address and the awaiting screwdriver.

“That’s how a lot of architecture is nowadays,” says Coscolluela who, to begrudge his seniority, prefers to be called “Willy,” a fact not lost on his young partners and employees. Coscolluela is also a comic. “Just screw it up,” he says in the vernacular as if the components of the pre-fabricated canopy had just arrived. What he didn’t know was that we took a quick leave after an interview over lunch at The Palisades to visit the loo. And there—lo and behold—was Willy, the preferred monicker of the famous architect, stamped on the stainless steel toilet paper dispenser in the comfort room beside the boardroom of his offices on the eighth floor. If his laughter is contagious, his employees have seemingly caught the bug in this practical joke.

Upon re-entering the boardroom where we had transferred to after consuming J. Gamboa’s Tsukiji resto bento boxes of various seafood, we asked Coscolluela, “Did you know, Willy, that your office has a powder room fixture with your nickname branded on it?

He didn’t know about it, but he laughed all the same. It would seem that comedy becomes handy when you work in the muffled world of architects and engineers. Though not exactly toilet humor, the Willy dispenser is certainly a sign that W. V. Coscolluela & Associates is one of the happiest and joke-filled places to work in if you’re an aspiring architect or structural engineer.

LIKE TWIN TOWERS
ONE of the recent mover-shaker events in the usually glacially static landscape of architecture and design firms has been the appointment of Coscolluela’s twin sons, Gil and Gary, as partners in the firm, signifying a changing of the guard, a succession of sons, and perhaps more time for the old man to play golf.

But he hates the term “old man.” Instead, one should rather think of the long list of notable projects when one dwells on the architectural Coscolluelas. (The political ones from another side of the family are said to be far relations, “the richer ones” of Bacolod, while he hails from Iloilo.)

From Ayala Land’s first high-rise residential condo, the Twin Towers, to SM’s by-then largest mall in the country, SM City North Edsa; to the modernist dialogue of two giants with adjoining appendages that is the swirling complexity of RCBC Plaza—the list of Coscolluela projects is staggering and we’ve just touched the surface.

His son, Gil, a product of the College of Architecture, the University of the Philippines in Diliman, has compiled a portfolio of commercial, retail and office interiors the firm has done, including the “first-ever Philippine-granted, platinum-level Leadership in Energy and Environmental Design [Leed] certification by the US Green Building Council for the interiors of Zuellig Pharma” at the top floors of the most recent high-rise addition to the corporate skyline of Makati in a decade, the Zuellig Building, also a major project of the firm. It has the distinction of attaining the first local Gold Leed pre-certification.

Meanwhile, Gary, following in papa’s footsteps by finishing architecture at the Mapua Institute of Technology (now colleges under the Yuchengco-Malayan Group), has hardened knuckles with the fundamentals of structure, virtually overseeing the completion of Discovery Shores Boracay from the ground up—a project that has won acclaim and, not surprisingly, has influenced a modernist approach to similar ventures that otherwise would have gone for the “native” or “ethno-tropical resort and leisure” aesthetic that had long typified coastal developments. Not that there’s anything wrong with primitive structures, but let’s have modernism for the present age.

Ultimately, the twins and the father now form a triumvirate of principals for the firm whose group efforts were summed up five years ago in a large-format hardbound, titled Function+Form, designed and prepared by Willy’s daughter, Mara Coscolluela-Quintal, illustrating photographically the journey of a vision that started a year after Coscoluella graduated with honors from a full scholarship at Mapua. With guts, he opened his own practice with two employees in the late 1950s.

Though his first project, the house of Hilarion Henares, is not included in the book, one swoons at the manifesto that includes a list of collaborations and full-fledged oeuvres: Philam Life Tower, Galleria de Magallanes, SM Makati, Robinsons Galleria, JG Summit Center, World Trade Center (Pasay), etc.

The book, however, doesn’t contain the firm’s ongoing and most recent projects, such as the highly anticipated SM Aura Premier in Taguig, SM Seaside City Cebu, and the Iloilo Convention Center, an anchor for Megaworld’s township near Smallville in Mandurriao, also alleged to be the scene of perhaps a few ministerial meetings for the Asia-Pacific Economic Conference to be held in Manila and nearby cities and towns in 2015, according to the senior Coscolluela. And we haven’t even touched on the other ongoing projects for the Ateneo de Manila University, Robinsons Land and other top brands.

Despite these recent additions to the portfolio, the list of the firm’s major works is too lengthy that you have to buy the book, a distillation of half a century of concentration. The problem is that the book isn’t for sale. It’s priceless, given as a gift, a reminder, sometimes as a reward, a keepsake that big things can start from small things, like the first jottings of a child—or even grown twins like his sons—who can be groomed for excellence.